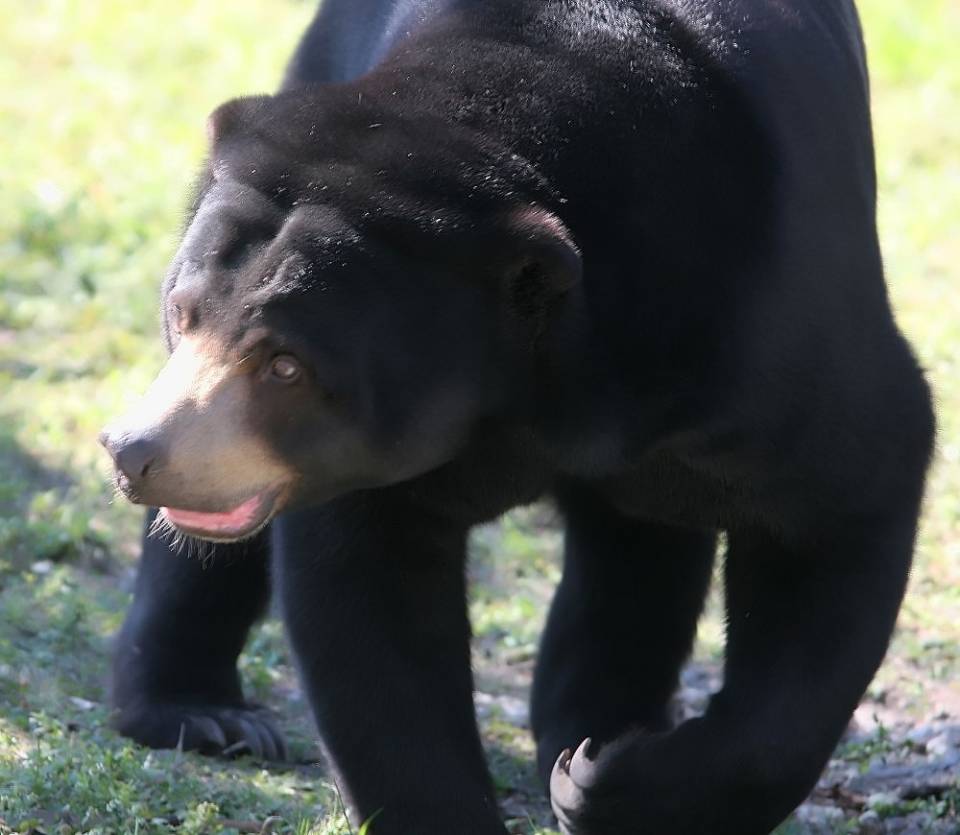 This little animal is a sun bear. Also called coconut bear or bruan. It is the smallest representative of the Ursidae family. His height at the withers does not exceed 60 centimeters! It is 1.20 meters long. The male rarely weighs more than 90 kg and the female 50 kg.

This nocturnal animal spends the vast majority of its time in the trees on which it builds its nests with branches and twigs. It also finds part of its food there. Its territory is spread over ten Asian countries (India, Bangladesh, Burma, Thailand, Malaysia, Vietnam, Cambodia and neighboring islands). The sun bear is an essential element in its ecosystem. It actively participates in the proper functioning of tropical forests. Indeed, as one study explains: “ This animal is a key species. As the sun bear is fond of fruit, it actively participates in seed dispersal, which helps forest trees survive. The sun bear is also involved in regulating the number of forest pests such as termites. When searching for ants or bees, the bear creates new cavities in trees with its particularly sharp claws. By doing this, the animal is indirectly responsible for creating living spaces for species like the hornbill, the flying squirrel and other small beings living in the trees. By digging through leaf litter in search of food, the Sun Bear leaves scraps for scavengers like pheasant or partridge, helping to maintain the nutrient cycle in forests. "

Less famous than its ice cousin, the polar bear , they unfortunately share the same fatal trajectory. When one drifts dramatically on a piece of ice floe because the climate warms, the other disappears because of its bile and the loss of its habitat useful for the manufacture of palm oil.

The bear has always faced threats. In the 20th century, hunting and poaching nearly decimated it. And even though hunting has largely declined, it continues to be poached to fuel the illegal cash trade and organ trafficking. An example as eloquent as it is distressing, traditional Asian medicine, in particular Chinese, is fond of the bear's gall bladder to manufacture remedies against headaches, ulcers, hemorrhoids, epilepsy among others. The list is long. Let it be said, bear bile works miracles, and it does not date from yesterday. It goes back to the year 659! Even today, this traffic persists. Yet scientists have come up with an equivalent synthetic bile. But nothing helps. To add to the horror, for decades, thousands of bears have been torn from their natural environment to form breeding farms for commercial purposes. Their conditions of detention are unspeakable; stored in cages far too small, their fangs and claws are broken and cut, and they are in constant pain from the catheters used to extract the bile. Laws have been passed to put an end to these breeding but they are flouted. The farms still exist underground. In 2015, the NGO Traffic, which works to combat the trade in wild animals and plants, reported that nearly 60% of the gall bladders on the market, sold in the majority of traditional medicine shops, still came from sun bear.

Another danger for the bear: deforestation . Burma and Thailand, but more broadly South-East Asia, are deforestation on a large scale and destroying its habitat. Millions of hectares of forest went up in smoke, causing much wider damage to the entire local ecosystem. Economic development always demands more farmland. At this rate, palm oil and soybeans will quickly have bear skin. Its population is drastically reduced. This is the reason why the coconut bear was listed in the appendices of CITES (Convention on International Trade in Endangered Species of Wild Fauna and Flora or Washington Convention). In 2008, it was also classified in the category of vulnerable species by IUCN (International Union for the Conservation of Nature).

As in many areas, fortunately, solutions exist. They are not numerous but they are simple and effective. At least in theory. You still have to want to apply them. Let's start by changing our consumption habits. We must refuse all products that contain palm oil. This is the only way to stop the deforestation intended for its manufacture. Every purchase of a product containing it, however small its proportion, is a crime. You have to understand it. Let's take 2 minutes to read the composition of what we are buying. Substitute products abound in our food-stuffed societies.

There is, then, a gigantic work of communication and awareness raising among local populations, to fight against centuries of tradition and culture in order to get each inhabitant to refuse to contribute to this unworthy traffic.

Finally, we can count on the fantastic work done every day on the ground by NGOs but also certain local authorities. The task is arduous but not desperate even if this little bear remains in a very bad position and its future remains as bleak as its beautiful coat.

Thanks to the NGOs:

Not to mention, the many researchers and academics.