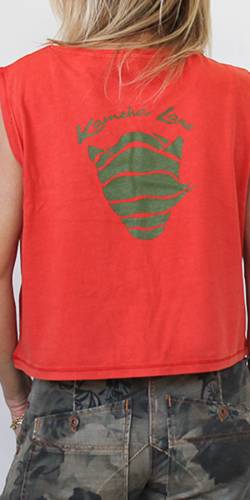 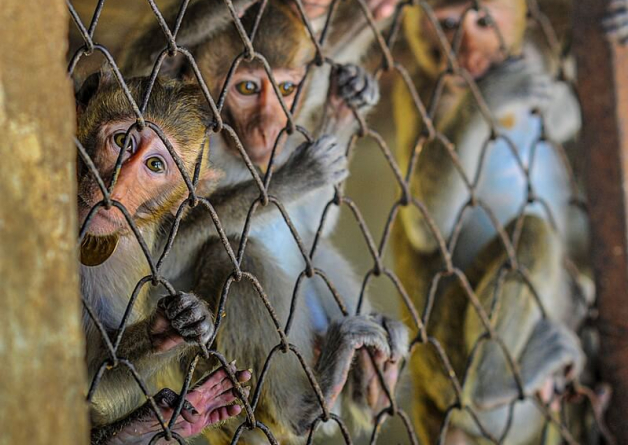 Laboratory experimenters demand monkeys by the tens of thousands each year, supporting a violent, greedy, and secretive industry that’s fueling the illicit trade in monkeys. The billion-dollar industry—composed of trappers, international breeders, commercial importers, airlines, and U.S. domestic trucking companies—is increasingly turning a blind eye to monkey laundering as the price “per tail” for the end user reaches thousands of dollars. Whether abducted from their forest homes or bred on factory farms in Asia and Mauritius, monkeys in this cloak-and-dagger industry are moved from far-flung areas around the globe, endangering native monkey populations and an unsuspecting U.S. public along the way.

PETA is now pulling back the curtain on this clandestine, nasty world in which monkeys are traded for cash, its operatives cloak themselves in secrecy, and the dangers to humans are ignored.

Violence Flows Through It

Snatching monkeys from Asia and Mauritius is faster and cheaper than breeding them in the U.S., so a monkey-abduction pipeline pours thousands of them into the U.S. from overseas every month. The pipeline is steeped in violence, end to end.

It begins when hunters in Cambodia, China, Indonesia, Mauritius, or Vietnam trap mother monkeys, pry their babies away and stuff them into bags, and cram the mothers—and any of the other troop members who have survived being captured—into crates. Some will be sold directly to U.S. laboratories, while others will end up on commercial monkey factory farms first, where the mothers will be forced to live and breed in filthy, barren conditions. Injury and sickness are frighteningly common at these facilities, and many of the monkeys die. All the babies are ripped away from the mothers shortly after birth.

The cost to the species is devastating. “Trade in live primates, both legal and illegal, is a major threat to nonhuman primate conservation,” according to an International Primatological Society policy statement. “Capture of nonhuman primates from the wild is stressful for the animals and increases the suffering, risk of injuries, spread of disease and even death during capture, storage and transport [emphasis added].”

Those who survive on these monkey factory farms—which have similarities to “wet markets” that can’t be ignored—are crammed into small wooden crates and loaded onto planes by the hundreds for a dark and terrifying flight to their certain deaths. The journey sometimes takes days, leaving the monkeys to fester in their own urine and feces before they arrive in the U.S.

These flights are risky to monkeys and humans alike. They expose numerous people—flight crews, passengers, cargo handlers, airline agents, and any other animals being transported on the planes—to monkeys who may be infected with communicable diseases. Potentially, in the case of an escape, the public may also be endangered.

It’s easier to track a package than it is for the public to learn about shipments of these sentient beings into the country. The U.S. Fish & Wildlife Service keeps count of the number of monkeys coming into the country, but these figures are entirely unavailable to the public. Documents obtained through Freedom of Information Act requests are heavily redacted.

Some shipments contain as many as 720 monkeys. Are they inspected? All of them? Are any monkeys sick or dead on arrival? These questions fall under the purview of the U.S. Department of Agriculture (USDA), but none of this information is readily available to the public.

The U.S. government knows this pipeline system is dangerous but ignores it. The Centers for Disease Control and Prevention (CDC), which has banned the importation of primates for private ownership since the 1970s, testified before a U.S. House of Representatives subcommittee that “[n]onhuman primates, particularly those recently captured in the wild, may have infectious agents in their blood or other body tissues that can cause severe or fatal disease in humans” and that because “nonhuman primates imported into the United States from foreign countries often have an uncertain health history, [they] may potentially carry diseases infectious to humans.”

The CDC has “approved” multiple facilities—the government won’t say how many—around the country to quarantine imported monkeys before they’re trucked to their eventual deaths in laboratories. The CDC won’t reveal where they are or how many monkeys are being held or give any other information about the sites or the monkeys there. It’s completely secret.

Clear and Present Danger to the Public

Because of our genetic similarity, the risk of transmission of bacteria and viruses from monkeys to humans is greater than with any other group of animals. Primates are known to carry and transmit a slew of nasty pathogens and diseases, including herpes B virus, tuberculosis, antimicrobial-resistant microbes, Ebola-like viruses, simian hemorrhagic fever virus, shigellosis, salmonella, campylobacter, malaria, dengue, and leprosy.

This risk of potential transmission increases when monkeys arriving at U.S. airports are then tossed into trucks and transported sometimes hundreds of miles on public roads to these undisclosed quarantine sites. It’s not obvious to passersby that these trucks are potentially carrying the next pandemic. They’re frequently not 18-wheelers. More often, they’re ubiquitous, unmarked pickup trucks with a closed trailer, without so much as a “Danger” or “Warning” sign to be found. They’re driven by untrained contract drivers who are ill-equipped to deal with any sort of emergency.

Residents of Danville, Pennsylvania, recently got an unwelcome glimpse into the frightening anonymity with which this trucking system operates—and its potential for disaster—when one of these unmarked trucks spilled its cargo of 100 monkeys onto a public highway and three escaped.

The CDC website is explicit about the infectious threat that imported primates pose to human health:

NHPs [nonhuman primates] may carry infectious diseases that are dangerous and sometimes fatal to humans. These infections include those caused by Shigella, Salmonella, Ebola virus, herpes B virus, Mycobacterium tuberculosis complex (bacteria that cause tuberculosis, or TB), yellow fever virus, and many others. People working in temporary or long-term NHP holding facilities or involved in transporting NHPs (e.g., cargo handlers and inspectors) are especially at risk for infection.

Although the commercial monkey importers are required to screen for deadly pathogens that could spill over to humans, they’re often missed, not all can be detected, and some don’t show up until months or years later. And new, unidentified viruses that have the potential to cause pandemics are also a risk.

Researchers interested in the inherent zoonotic disease risks associated with the international animal trade determined that trade in two primate species—long-tailed macaques and rhesus macaques—carried the greatest potential for transmission of zoonotic disease. This is of particular concern because in the last decade alone, commercial primate importers brought more than a quarter-million long-tailed macaques and rhesus macaques into the U.S.

Almost No One Makes It Out Alive

The U.S. experimentation industry is holding 108,000 monkeys in laboratories. They’re used in a dizzying array of painful and deadly ways, including as test subjects for herbicides and pesticides or to test new pharmaceutical drugs, the vast majority of which are worthless. Both the National Institutes of Health and the USDA admit that 95% of all new drugs that test safe and effective in animals are either unsafe or ineffective in humans.

Monkeys are also used in curiosity-driven experiments, in which they may be cut open, electroshocked, irradiated, infected with disease, addicted to drugs or alcohol, kept in solitary confinement, traumatized in terror experiments, or subjected to assaults to induce depression and countless other horrors, in places such as the seven federally funded national primate research centers. 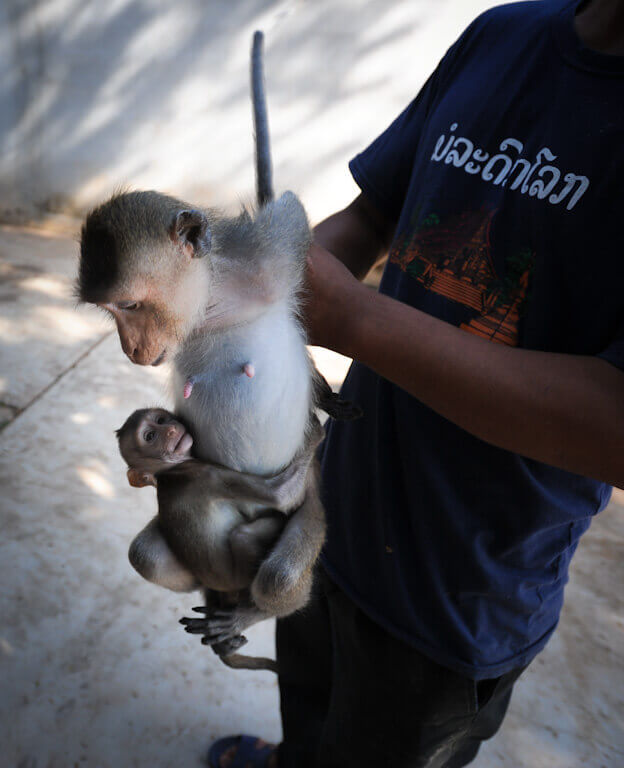 Experimenters kill most of the monkeys when they’re done with them or after their bodies are too spent to continue. Very few make it out alive, and none ever make it back home.

Despite decades of promises and hundreds of thousands of dead monkeys, experiments using the animals haven’t resulted in effective vaccines for HIV, tuberculosis, malaria, or other dreaded human illnesses. COVID-19 experiments have shown the scientific community how irrelevant and often misleading monkey studies are. It’s time to end this barbaric and deadly trade.

What You Can Do

Please take a minute to TAKE ACTION today by adding your voice in opposition to the CDC’s importation of monkeys for laboratory experimentation. Tell the agency to shut down the monkey-abduction pipeline. 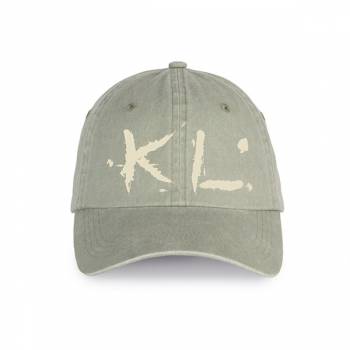