Corrida: sad day for the bulls.

It is a text that has been awaited for decades by animal rights associations and all compassionate people who know that a bull suffers when blades are driven through its body. However, despite the support of 77% of French people (January 2022 poll) wishing to ban bullfighting in France, the bill to abolish it could not be debated because of parliamentary obstruction. The number of amendments tabled was such that it seemed impossible to discuss the text and proceed to the vote before the end of the day, leading Aymeric Caron to withdraw the text. Our elected officials refused to meet the expectations of the French people and left the bulls in the hands of their torturers.

It's a sad day for the bulls – sensitive, sociable and intelligent individuals, who feel fear and pain and hold on to their lives just like us – who are being stabbed to death in French bullrings. Having fun should never cost the life of a sentient being.

Death and torture will NEVER be a spectacle

Each year, more than a thousand cattle are thrown to human cruelty in the arenas of France. During a bullfight, each of these bulls is doomed . He is chased on horseback and has pikes and banderillas stabbed in his back and neck until he is exhausted and has lost so much blood that he can hardly breathe and stand. . The matador then enters the scene to try to finish him with a sword but it is not uncommon for the "killer" to miss his shot and pierce the lungs instead of the heart, and the bull then drowns in his own blood. .

Some bulls are still conscious when their ears and tails are severed and brandished as "trophies", before being dragged by chains out of the arena. Then another bull is led to the arena and the infernal cycle begins again.

Let's keep fighting for the bulls

Today, the people who persist in defending this cruel practice are only a very small minority, and bullfighting only survives under the infusion of public and European aid.

If we made dogs suffer half the abuse that we inflict on bulls, the executioners would not be applauded but rightly judged and imprisoned. This would also be the case if a complacent law had not introduced an exception to article 521-1 of the Penal Code punishing acts of cruelty to animals, thus breaking with the equality of citizens before the law.

So that this legislative anomaly is finally corrected, let us continue to make the voice of the bulls heard. We will persist alongside the other associations in working to ensure that this bill is put back on the agenda as soon as possible. Stay informed by following us on our social networks – Facebook , Twitter and Instagram .

And join the PETA Activist Network if you want to participate in events and protests happening in your area: 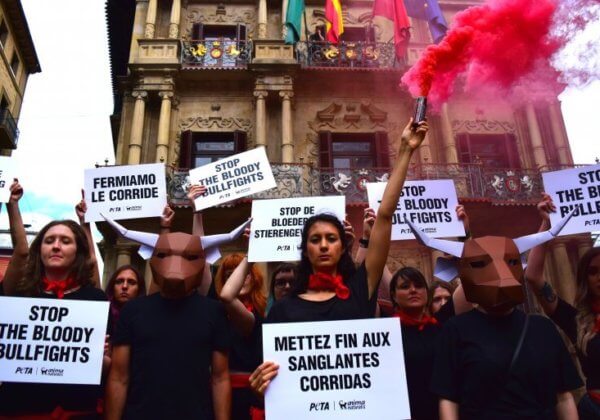